All Star is a song originally by the American band Smash Mouth that Alli Fitz covered along with The Gregory Brothers. The song was released on July 28th, 2017.

Somebody once told me the world is gonna roll me
I ain't the sharpest tool in the shed.
She was looking kind of dumb with her finger and her thumb
In the shape of an "L" on her forehead

Well, the years start coming and they don't stop coming
Fed to the rules and I hit the ground running
Didn't make sense not to live for fun
Your brain gets smart but your head gets dumb 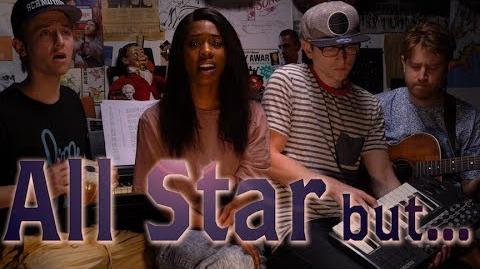 Retrieved from "https://allifitz.fandom.com/wiki/All_Star?oldid=1803"
Community content is available under CC-BY-SA unless otherwise noted.